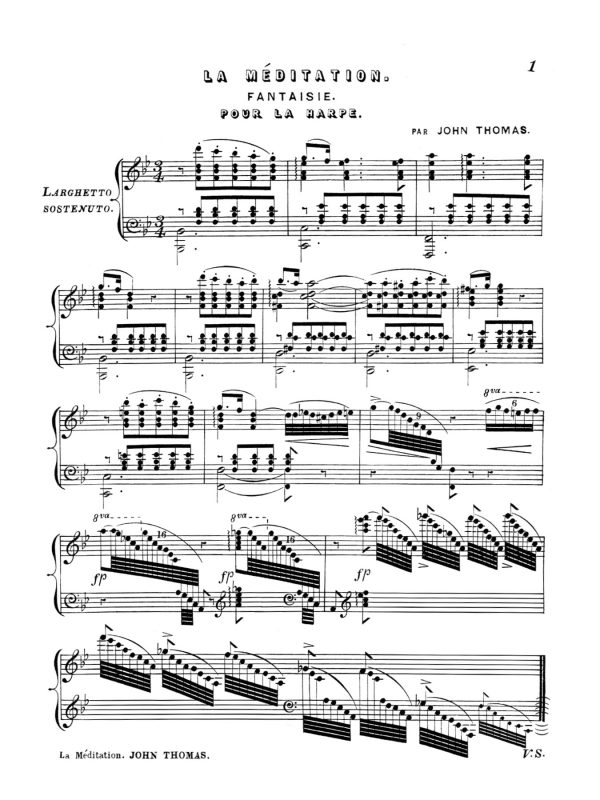 John Thomas, started his career as the crowned champion of the Welsh triple harp, a folk harp with three rows of strings still in use in Wales. Lord Byron’s daughter Lady Ada Lovelace paid for him to study classical harp at the Royal Academy of Music in London. While he rose in the ranks in British society, he always remained faithful to his roots, composing many Welsh-inspired works for solo harp, and for voice and harp. He was appointed harpist to Queen Victoria in 1872.

The recent discovery of La Méditation by John Thomas in an early 20th century bound collection of harp music elicited a sense of wondrous felicity. Where had this piece been all these years?  It is not part of the Adlais Music revival of John Thomas works (adlaismusicpublishers.co.uk), and seems to have received little notice even during his lifetime. The Musical Times of August 1, 1869, p. 179, mentions Mr. John Thomas’s annual Concert at the Hanover Square Rooms, where La Méditation was paired with his mazurka L’Espérance.

An earlier performance is described in The Musical World of July 14, 1860, p. 449, in the same locale. Mr. Thomas set the tone with the “Meditation on a prelude of Sebastian Bach” by Gounod arranged for violin, harp and harmonium. He then continued solo with his “Winter, ending with a Hymn”, and “La Méditation”, described as a “Rapsodie”, followed by “Danse des Fées” (by Parish Alvars), the set of three pieces said to be “eminently successful with the public”.