The three musical sketches of the collection Albumblätter (Album Leaves) op. 342 are headed by poetic excerpts from the treasury of German romantic poetry. Like most German-speakers of his time, Oberthür was steeped in the verses of the famous poets, the kind that stayed with you forever as your inner life’s steady companion, and which over time became a sort of common folk language. He later also gave much attention to poetry in other languages (mainly French and English) as he became the successful cosmopolitan we remember today from his international publications. For him, the literary transforms on the spot into musical ideas, and off we are on a playful voyage with him. 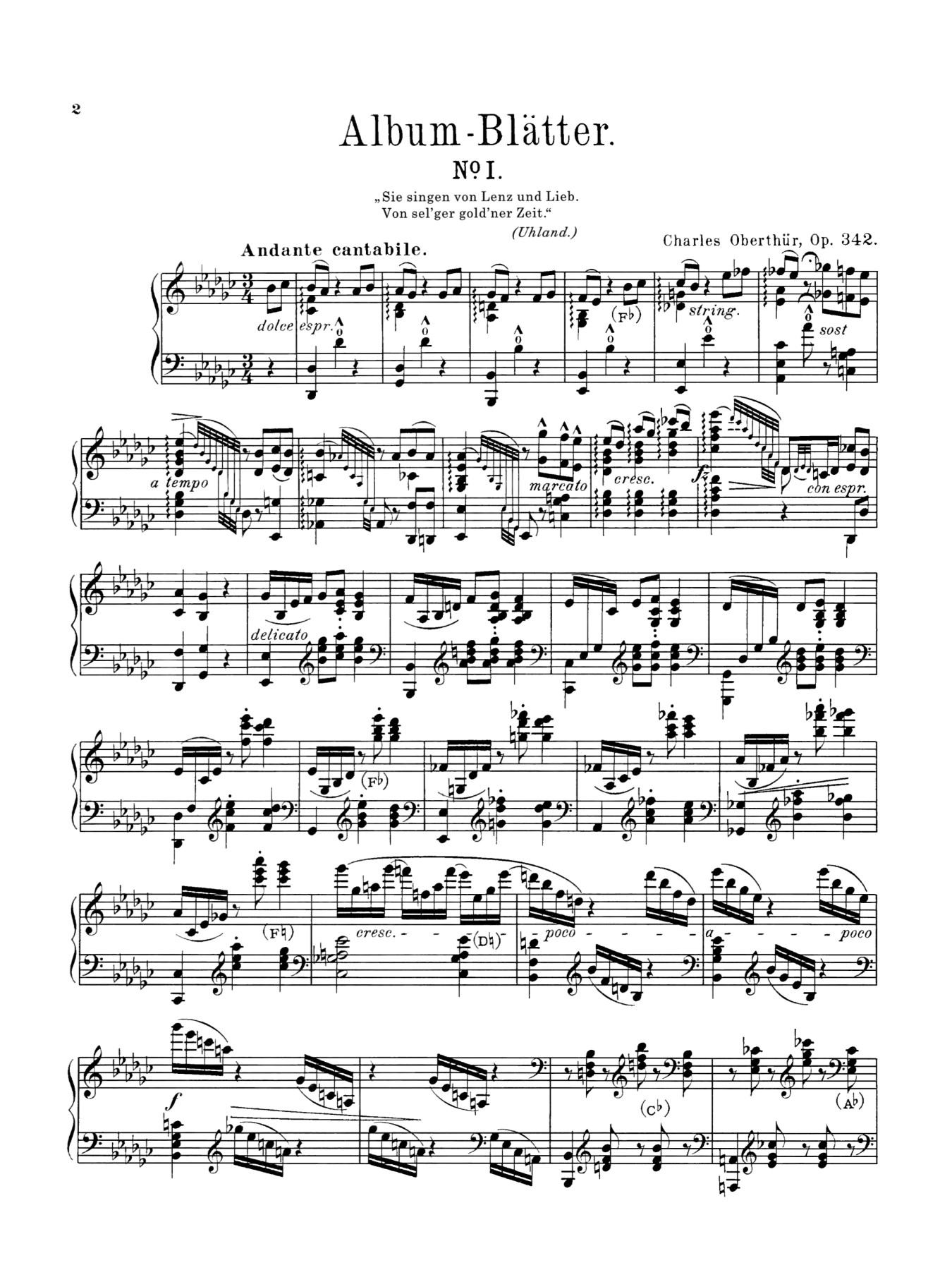 So is this what program music is about, as opposed to pure music? In these pieces, I have found that the “trip” can be described as a feeling washing over you, offering a simple but thoroughly enjoyable immersion into 19th century emotion.

The intro to the first piece, Andante cantabile, intones:

The rhythm of Uhland’s poem lands emphatically on the last word, Zeit, giving it a feeling of the infinite being suspended, mirrored in the music – ever so slightly – in the sighing “sliding thumb” chord figures.

“They sing of springtime and love, of a blissful and golden time.”

And that is exactly where the music goes… While the original poem continues wordily, Oberthür stops right there in his tracks, dancing to a tune of unbridled happiness that  moves into all the directions the tonality will allow.

These are the first two lines of the 1858 poem Ständchen by Friedrich Marc, literally translated as

“Hear my lute’s ringing tones
Quaking through the quiet night.”

The crisp 6/8 rhythm sets the tone for a scene of utmost calm, covering up the underlying agitation of a wistful heart that wishes to be heard by the beloved.

The third piece, Con moto, first moves along peacefully, faithful to the first sentence of Heinrich Heine’s 1830 poem, which had already been set to music by Mendelssohn (he of “Spring Song” fame) and became famous as a tune for children.

“Quietly roams through my heart
A delightful chiming.
Sound out, little spring song,
Resound into the big wide world.”

Then, moody cross-fingered chords give way to an outright sentimental tune (dolce cantabile) with heightening intensity – that’s the little spring song of the second sentence for you – and their quiet ringing resumes till the last ascent, ending rather abruptly with a quick final cadence.